Sharing intimate images, videos is one of the ways we build strong relationships with friends and lovers, an evident part of adolescent growth. However, teens should know that any private messages, pictures, or videos sent online can be shared with the whole school, not to mention the rest of the world. The reality is that privacy and trustworthy relationships can’t count on the temptations and technology’s limitations.

Sometimes your teens not wise and knowledgeable enough to make choices about what is suitable for texting. Unfortunately, an impulsive decision can harm your kids for the rest of their life. Teen sexting is one of these unwise decisions.

In this section, we will go into detail about the 4 signs of sexting in teenagers – things parents should watch out for.

What is Teen Sexting?

Sexting is the sending, receiving or forwarding of pornography or pornographic messages via text message or email. Although the term “sext” appeared more than ten years ago, the concept of exchanging or storing sexually related images or messages is not new.

Then, as the internet came into being, electronic devices and social media became tools to simplify and spread sexual materials easier and more powerful than ever. With just one click, a photo can be widely distributed to many others. And once this content has been spread, it will remain forever on the Internet, there is no way to permanently delete it.

Some facts about teenage sexting photos

One of the most recent and comprehensive studies shows that while adolescent sexual texting is not a disease, it is happening despite calls for this sexting trend mitigation. Some teenage sexting statistics:

The research by Justin Patchin and Sameer Hinduja through a survey of 5,593 American middle and high school students aged 12 to 17 years old, found:

Some other facts about teen sexting that you should be worried about now:

On the other hand, if you’re a girl and other girls are bragging about sending a nude photo to their boyfriend, you may feel you need to do so; especially if you feel like “everyone else is doing it.”

Oftentimes, teen self nudes are sent because they hope they can start a new relationship or receive positive comments about their body, satisfying their self-esteem. Sometimes, they are pressured by friends that they will not cool enough to them if not sexting like them.

The frequent use of technology devices and the lack of knowledge about the law have escalated the phenomenon of teen sexting. They think that indirect communication via phone or Internet devices will be less risky and easier than directly interacting.

But importantly, a lot of teenagers think the consequences are not so bad and if they are, they will be an exception and nothing bad will happen to them.

This is a huge factor. When in a gender-curious age, even when your kids accidentally see any pornographic image, they become particularly curious and aroused by nudity. When they keep searching for things about nudity, sex, and everything related, their curiosity gets bigger and bigger.

Finally, sexting will be one of those things that they think they would try to satisfy their needs.

Signs of sexting in teenagers

If your daughter (or son) is sexually texting, your child may become overprotective of cell phones and hide their screens from public view. Since your child won’t want to show you and know anything about this, he can sleep with his phone under his pillow and keep his phone in his eyes at all times.

You may find your child uses the phone more: after school, during mealtime, before bed, and so on. And your kid leaves the room to talk or text and insists on using his or her phone in a private place.

Negative moods, crying, anxiety, etc. can be some examples of mental consequences of sexting – when your child being smeared on social media or their sexual text messages,  images leaked and spread throughout social media.

Why you should talk about sexting with your child, NOW?

Obviously. You don’t want things to become too late to be handled. You don’t want your ignorance will leave your daughter a victim of sexting, and you know, the negative effects of sexting will last for the rest of her life.

One mistake is that many parents assume sexting is harmless because, in reality, no sex happens. However, sexting is a form of sex – sending, receiving and transferring nude, pornographic photos, messages, videos such as nudity, sexual behavior or sexual emoticons.

The problem is getting worse as being constantly at home makes children (and adults) easily feel bored and motivated to do something new, leading to many children viewing sexting as one of the “exciting” behaviors to do during the epidemic season.

Sexting often begins as a solicitation from teen to teen, presented in the form of a promise of privacy, proof of true love or popularity. However, not so many teenagers are wise enough to acknowledge that once pornographic images, videos become public, which are widely spread, they have to pay high prices.

Your daughter may be subject to those body-shaming words, criticism of personality. Not only do they endure the pain, humiliation and cyberbullying from their friends, but some serious legal consequences can result from just one sexual message.

3 tips to talk to your daughter about sexting

“Hey dear, what do you think?”

In turn, you can talk about why is sexting bad.

Schools often create conferences about problems related to dangers on the Internet, and obviously, sexting will be one of them. Make sure you join these school meetings frequently to keep yourself updated about these topics and use this information as materials to start a conversation at home. Sometimes what many parents (maybe you) think is true but in fact, inaccurate and baseless.

During those meetings and discussions, you can meet with other parents and know how they share sensitive problems with their children as well as other parenting tips. 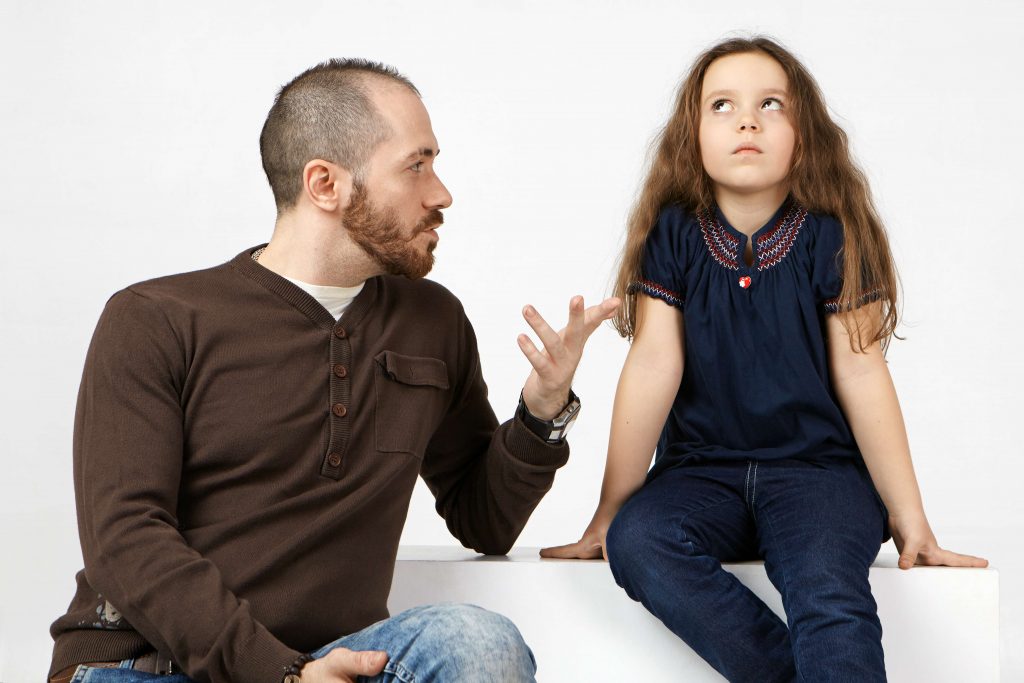 Don’t teach. Pay attention to your tone of voice

Don’t become too worried if you find something on your child’s phone or you hear some of their friends doing it. To understand your kids and their friends talking, you might need to know some terms related to sexting.

Remember – this is an opportunity for you to reach out to your child, open the door for future conversations with more sensitive problems. So, it is important not the thing you say but the way you say it.

Pay attention to your tone of voice, if the kids realize you are too serious or going to scold them, you are slamming this important door and push your kids away. (And they won’t talk to you about anything personal for a long time.)